Philippine film criticism in mainstream media is virtually non-existent compared to other movie-producing countries. Major dailies don’t have film critics among their staff; instead, they have entertainment writers that sometimes “review” films. Instead of film reviews, what we have is a plethora of award-giving bodies. There  are around ten organizations that hand out yearly awards to films, not counting the various film festivals that give prizes to a selected number of films that are included in the festival line-up. Among these ten bodies, only two – the Manunuri ng Pelikulang Pilipino and the Young Critics Circle – can be taken seriously. These organizations have members coming mostly from the academe, and they are the ones who take pains at viewing all local movies that come out in any given year. But even these organizations don’t provide up-to-date reviews of local films. The latest review posted in the Manunuri website, for instance, was of Ang Panggagahasa Kay Fe, a film released in 2009. The most current criticism of Filipino films nowadays is provided mostly by a handful of young film bloggers such as Richard Bolisay, Oggs Cruz, Dodo Dayao, and the like. Noel Vera used to be the at the forefront of Philippine film criticism but now that he is based outside the country, he gets to see Pinoy films later than home-based bloggers do. Still, Pinoy filmmakers who are serious at improving their craft anticipate his reviews of their films.

Beginning the dawn of this century, with the democratization of digital technology, talented filmmakers have been making their own movies for a fraction of the cost that it used to take to make one. No longer needing the decision of an executive who will decide if their movies would be profitable or not, and encouraged by the success that indie filmmakers like Jeffrey Jeturian and Lav Diaz garnered from foreign film festivals since the late 1990s, young independent filmmakers have been churning out quality original films, inadvertently ushering in what film scholar (and former professor of mine) Rolando Tolentino calls “the third golden age of Philippine cinema – the indie digital cinema”.

But it’s really sad that independent movies are hardly seen by most Filipinos. We flock to Star Cinema’s romantic comedies, some of which are half-decent, but we don’t have time to check out  good indie films, which  are way better. Being a Bisaya speaker, I am particularly pleased that some of the best films that came out last year were made by filmmakers coming from outside of Metro Manila. I hope this will encourage non-Tagalog filmmakers to continue the streak of making quality films.

Anyway, these are the ten films released last year that most film bloggers liked, ranked according to frequency of mentions. 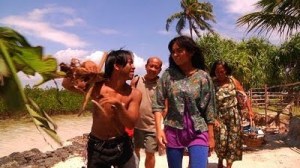 “Terya, a simple barrio girl, is about to leave her family to marry a foreigner. Her journey ignites a series of events and introduces certain people in her life that will affect her decision to stay or go. The story takes place in the scenic Olango Island (in Cebu) during the Baliw-Baliw Festival, an event which parallels Terya’s state of mind as she walks towards her destiny”. (cinemarehiyon.org)

“The single take technique counts as insanity, and as a plus given how insanity gets factored in less and less in films these days, but it doesn’t show off so much as gives the piece buoyancy and in doing so attaches a sensation to the nonchalance with which we shrug off in real life the social malaise – – or any social malaise for that matter – – – at its heart. Plus, it’s funny as all hell”.

2. Kano: An American and His Harem (Monster Jimenez)

“An American Vietnam War hero decides to spend the rest of his post-war life in the Philippines. Hundreds of women have come and stayed in his house located in a poor, remote village. In 2001, Pearson was charged with over 80 counts of rape.

Pearson is now in jail but many of the women remain by his side. Kano is the fascinating and awful story of a convicted rapist and his women who come together to form a most dysfunctional family.

Oggs Cruz (Lessons from the School of Inattention):

“(T)he documentary takes a life of its own, rollercoasting on emotions ranging from anger to amusement, and frustration to delight. It moves seemingly without direction because the director itself is moved by her subject, gravitating only to the business of exhibiting Pearson’s life and dilemma. As willing companions of Jimenez in her creatively crafted and deliciously enjoyable attempt to simplify the complexities of Pearson and his women’s unique situation, it is best to enter Kano: An American and His Harem with an open mind, totally unresisting of the probable charms of Pearson and his bountiful love”. 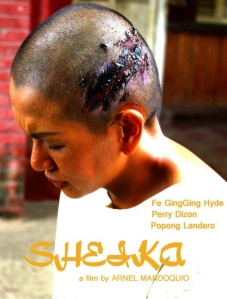 “Sheika is the story of a woman ravaged by the ongoing war in Mindanao. In search of peace, she goes to the city but violence and death continue to haunt her”. (cinemarehiyon.org)

“This film is unlike any other crime drama this country has ever produced. It echoes maternal love, the Davao Death Squad, and the evils of war. Amazing performance from lead actress Fe Hyde… She goes from protective to vengeful mother in a bat of an eyelash. She is loving, broken, angst-ridden, and out of her mind”. 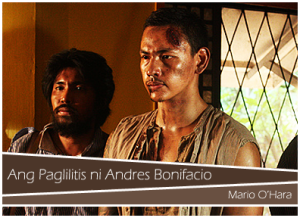 “Ang Paglilitis ni Andres Bonifacio tells the untold story of Andres Bonifacio’s trial for treason under the revolutionary government of Emilio Aguinaldo. The two leaders fought for freedom for the Filipinos yet a nation can only have one ruler. It is a film documentation of less often told episodes in Philippine history by Mario O’Hara”. (WikiPilipinas)
.

“Mario O’Hara’s take on the other great Filipino hero is understated drama, anguished tragedy, a tremendous love story, and in my opinion the film of the year”. 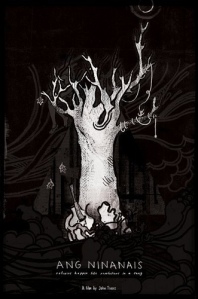 “After his city film Todo Todo Teros, this is a real countryside film. His protagonist, the girl Sarah, moves among the inhabitants of Guimbal on the island of Panay and improvises her scenes. She collects debts and possessions, but also people’s dreams, stories and memories. She moves to the island of Negros in order to meet the man of her dreams and then she takes on various roles. The film maker also follows his dreams and collects stories and poetry. The great poets Eric Gamalinda and Joel Toledo are quoted, but also dialogues in the original Hiligaynon language are included untranslated in the film for their sound, as music. An unusual approach. A kind of experimental anthropology in his own country”. (filmfestivalrotterdam.com)

John Torres, the director, explaining how the film was made 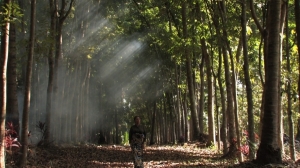 “Limbunan depicts the rituals of women who are preparing for the wedding of seventeen-year old Ayesah, who is about to be engaged to a man she barely knows. Later on, Ayesah is reunited with her childhood tutor who returns to the village as a militiaman after five years, reawakening her memory of childhood infatuation. Throughout Ayesah’s confinement, her precocious and rebellious younger sister becomes her eyes to the world beyond her room. Her mother Amina keeps her composure despite the fact that her husband sleeps with his second wife half of the time, finding solace in the belief that it is both her religious and familial duty to be an obedient wife. Ayesah’s aunt Farida is tasked to ensure that she is prepared for the wedding. However, Farida’s dark past challenges Ayesah’s resolve, choosing love and loyalty over tradition and family”. (cinemarehiyon.org)

“Limbunan moves gracefully. Just as gracefully as the women it portrays, who silently bear the ritualized oppression of culture and norms even as the rest of society moves forward. It is quietly powerful, painting a clear picture of a tradition without resorting to easy judgment”.

“When Vergel goes home to see his siblings, he discovers that his younger sister is living with an old man. After separating them, he tries to earn a living by recruiting some of the children in the town to find gold mines in the deep mud nearby. What follows is a series of haunting images that touches on innocence, love, and greed”. (cinemarehiyon.org)

“The first part of Mes de Guzman’s Earth Trilogy, Ang Mundo sa Panahon ng Bato, is a social commentary on many of the pressing issues concerning labor. Its strong messages on child labor, authority, pedophilia, prostitution, greed, family and of love are equally exposed and cached by series of lasting disturbing stills. All these sequences build up and lead to one conclusive image, one that will leave you haunted for days to come, and in my case, for six months now. That lasting impression is of tremendous rarity in local cinema of the late”. 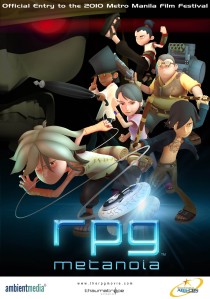 “RPG Metanoia is the first 3D animation film ever produced locally. Suarez and the entire team made it a mission to tell a uniquely Filipino story which is now hardly seen in our local films. It brings together generations of Filipinos who grew up playing street games such as patintero, piko, and syato, and the succeeding generation who grew up with MMORPG through a group of young friends who stick it out playing online and in the real world”. (WikiPilipinas)

“(A) thrilling movie that plays a lot like a video game, the story tells the importance of experiencing life outside the world of video games and social networking sites. The jaw-dropping animation is light years away from that of Dayo and Urduja. This is the best Metro Manila Film Festival movie in years”. 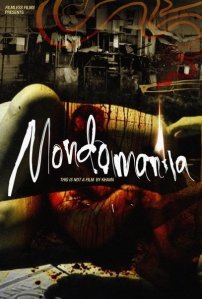 “Mondomanila is an adaptation of Norman Wilwayco’s Palanca-winning short story (2002), novel (2002), and script (2003). It is a post-modern version of Edgardo Reyes’ novel Sa Mga Kuko ng Liwanag. It not only explores Manila and its humanity, it also delves into the whole rationale behind the irrational lives these people experience everyday”. (khavndelacruz.org)

“Quite offensive, as one would expect from the sick mind of Khavn, and by this virtue alone, should warrant a divisive reaction from its audience. And that, in itself, is a good reason why it is up here in this list. Personally, I’m with the half that enjoyed the hell of it. I may not have loved it as much as Paalam Aking Bulalakaw, but it is definitely one of his better realized films. This is the fruition of a vision – that we see blurs and hints of with his previous works. Surely one of the few brave local directors we have now, that continually pushes the boundaries of violence and gore, even of lyricism and poetry”. 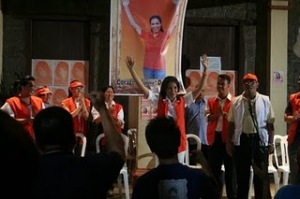 “Vox Populi follows a woman candidate for mayor in a small town on the last day of campaign. To ensure her win, she will need to secure the support of voters and financiers who may have varying, and even conflicting, desires and agendas”. (Cinemalaya Facebook Page)

“Vox Populi is funny as it is scary. In the guise of fictional Connie, Marasigan creates a Filipino Faust. There is no god in the picture, seemingly no redemption. There are no demons either. Politics, cynical as it seems, is Connie’s Mephistopheles. Democracy seems to be a sham. In the end, whether or not the road to the so-called bright future is straight and not crooked, the van going there is overloaded with favors and promises, investors and constituents”.

Click on the links below to see individual lists:

Oggs Cruz – Lessons from the School of Inattention